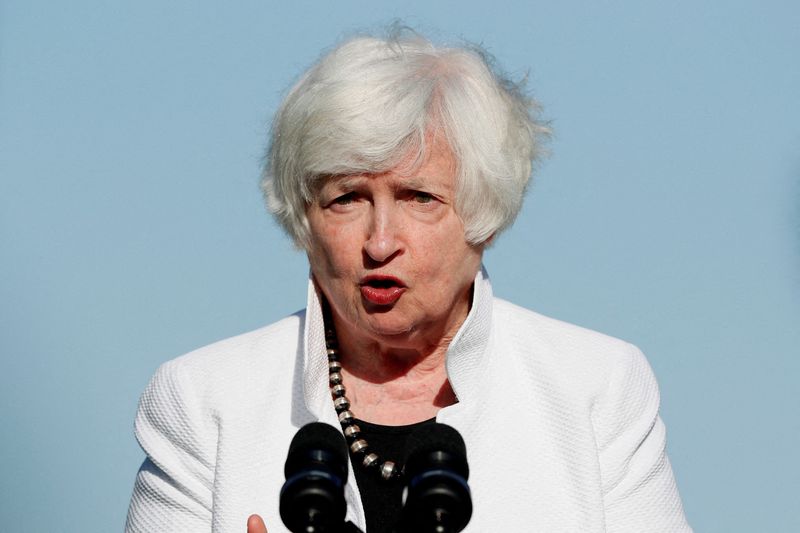 WASHINGTON (Reuters) -U.S. Treasury Secretary Janet Yellen said on Sunday that U.S. economic growth is slowing and she acknowledged the risk of a recession, but she said a downturn was not inevitable.

Yellen, speaking on NBC’s “Meet the Press,” said strong hiring numbers and consumer spending showed the U.S. economy is not currently in recession.

“This is not an economy that is in recession,” said Yellen. “But we’re in a period of transition in which growth is slowing and that’s necessary and appropriate.”

Yellen said inflation “is way too high” and recent Federal Reserve interest rates hikes were helping to bring soaring prices back in check.

In addition, the Biden administration is selling oil from the Strategic Petroleum Reserve, which Yellen said has already helped lower gas prices.

“We’ve seen gas prices just in recent weeks come down by about 50 cents (a gallon) and there should be more in the pipeline,” she said.

Yellen, who previously served as chair of the Federal Reserve, hopes the Fed can cool the economy enough to bring down prices without triggering a broad economic downturn.

“I’m not saying that we will definitely avoid a recession,” Yellen said. “But I think there is a path that keeps the labor market strong and brings inflation down.”

U.S. gross domestic product, a broad measure of economic health, shrank at a 1.6% annual rate in the first quarter, and a report on Thursday is expected to show a gain of just 0.4% in the second quarter, according to economists polled by Reuters.

Yellen said that even if the second-quarter figure is negative, it would not signal that a recession has taken hold, given the strength in the job market and strong demand.

“Recession is broad-based weakness in the economy. We’re not seeing that now,” she said.

Journalists, some economists and analysts have traditionally defined a recession as two consecutive quarters of GDP contraction. But the private research group that is the official arbiter of U.S. recessions looks at a broad range of indicators instead, including jobs and spending.

Brian Deese, director of the White House National Economic Council, said on Twitter (NYSE:) on Sunday that the upcoming second-quarter figures would be “backward looking,” which he called important context. “Hiring, spending, and production data look solid,” he said.