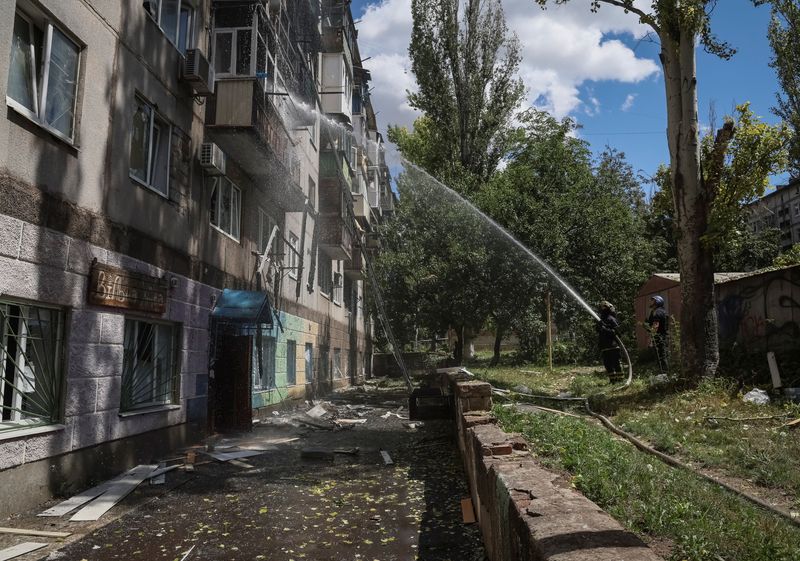 © Reuters. FILE PHOTO: Firefighters work to put out a fire in a residential building after a Russian military strike, as Russia’s attack on Ukraine continues, in Kramatorsk, in Donetsk region, Ukraine July 19, 2022. REUTERS/Gleb Garanich

KHARKIV, Ukraine (Reuters) -Russia reopened its biggest gas pipeline to Germany at less than half normal capacity on Thursday after a maintenance shutdown, raising worries of European energy shortages to come, while in Ukraine shells smashed into a market, killing three people.

The resumption of gas flows via the Nord Stream 1 pipeline to Germany ended a nerve-jangling 10 days for Europe in which politicians expressed concern Russia might keep it shut altogether after closing it for repairs.

But with the flows still cut back, Germany’s economy minister Robert Habeck accused Russia of blackmailing Europe over energy. The Kremlin denied that and blamed Europe for causing disruption with sanctions which had complicated the pipeline’s maintenance.

Nearly five months since Russia invaded Ukraine, the prospect of a disruption of European energy supplies is one of the biggest global economic and political risks arising from the war. European countries fear they could face shortages next winter, if Russia cuts back deliveries during warm months when they typically replenish storage tanks.

“(President Vladimir) Putin’s goal is to unsettle, drive up prices, divide society and to weaken support for Ukraine,” Habeck said. “We don’t bow to it but counteract this with concentrated and consistent action. We take precautions so that we can get through the winter.”

Inside Ukraine, Kyiv has accused the Russians of stepping up strikes on cities in recent weeks in a deliberate attempt to terrorise its population. Moscow denies targeting civilians and says all its targets are military.

In Kharkiv, Ukraine’s second-biggest city, shells struck a crowded market. A woman sobbed over the body of her husband lying near a stall while a couple tried to comfort her. Other residents stood around the bloodstained marketplace looking stunned.

“We saw people drenched in blood. We saw people on fire,” local entrepreneur Khaibar Karimi said. “We helped with bringing the wounded to the subway. The smoke was very thick. There were many wounded on the street.”

The regional prosecutor’s office said three people were killed and 23 wounded in shelling of two districts. The chief of Kharkiv national police, Volodymyr Tymoshko, said there were no military targets nearby.

The main frontlines have been largely frozen since Russian forces seized the last two Ukrainian-held cities in eastern Luhansk province in huge battles in late June and early July.

But Russia is shelling neighbouring Donetsk province in what Ukraine says is preparation for a potential new advance there. Russia aims to fully capture all of Donetsk and Luhansk on behalf of its separatist proxies.

Donetsk regional governor Pavlo Kyrylenko said Russian missile strikes had destroyed two schools in the Ukrainian-held cities of Kramatorsk and Kostiantynivka and had also hit the city of Bakhmut but there was no information yet on casualties.

“Russia is intentionally destroying our cities and towns. Do not expose yourself to danger – evacuate,” he wrote on social media, posting video, verified by Reuters, of one of the destroyed schools.

Russia’s defence ministry said its forces had destroyed the headquarters of Ukraine’s SBU intelligence service in Kramatorsk and had shot down a Ukrainian SU-25 military plane nearby. It said it had also hit Ukrainian artillery positions and arms depots near Kostiantynivka.

Russia says it uses high precision weapons to degrade Ukrainian military targets, but the war has flattened cities, particularly in Russian-speaking areas in the east and southeast of Ukraine.

Nord Stream 1 has traditionally carried more than a third of Russia’s gas exports to Europe.

“In view of the missing 60% and the political instability, there is no reason yet to give the all-clear,” said Klaus Mueller, president of Germany’s network regulator. Other countries in Europe, including France, Austria and the Czech republic, would also be affected, the regulator said.

The European Commission has proposed that member countries cut gas use by 15% to prepare for possible supply cuts, though some governments have resisted that plan.

Moscow says it sent troops to Ukraine to root out nationalists and prevent NATO using Ukraine to threaten Russia. Kyiv and its allies call it an unprovoked war of conquest.

Ukraine hopes Western weapons, especially longer-range missiles such as U.S. HIMARS which Kyiv has deployed in recent weeks, will allow it to launch a counterattack in coming weeks and recapture Russian-occupied territory.

It said taking the power plant, a Soviet-era coal-fired facility, fitted Moscow’s aim of capturing critical infrastructure and seemed like part of an attempt to advance towards Kramatorsk and Sloviansk, the main Ukrainian-held cities in the province.

Vitaly Kim, governor of the southern Mykolaiv region, said the region had been targeted with seven S-300 missiles. One person had been wounded, he said, and infrastructure damaged.

Reuters could not independently verify the reports.

Web Solution For Big and Firm