Lufthansa ground staff to strike over 9.5% pay claim By Reuters 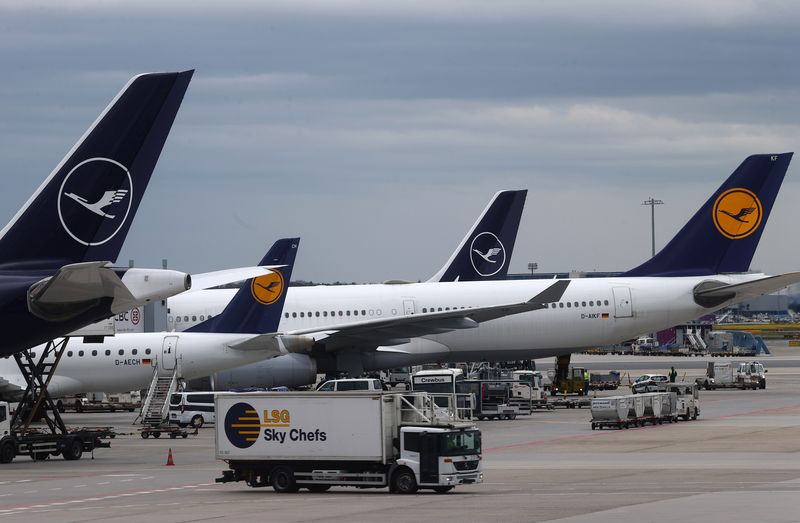 © Reuters. Planes of German air carrier Lufthansa are photographed at the day of the airline’s annual general meeting at the airport in Frankfurt, Germany, May 4, 2021. REUTERS/Kai Pfaffenbach

BERLIN (Reuters) – Ground staff at Deutsche Lufthansa (ETR:) will stage a one-day strike on Wednesday in pursuit of a 9.5% pay claim, adding to travel disruption during the busy summer travel season.

The walkout by staff at Lufthansa’s ground units this Wednesday will lead to additional cancellations and delays, labour union Verdi said, as it includes workers with key jobs such as aircraft maintenance, and moving aircraft away from boarding gates so they can head to the runway for takeoff.

Lufthansa said the walkout was “incomprehensible” and would be a burden on both passengers and staff beyond the end of the walkout.

The strike will affect German airports including Frankfurt, Duesseldorf and Berlin, and will run from 3.45 am (0145 GMT) on Wednesday until 6 am (0400 GMT) on Thursday.

Verdi last month demanded a 9.5% pay rise, or at least 350 euros ($368) more per month for 12 months, for around 20,000 workers who it says are being squeezed by inflation and have been overworked due to staffing shortages at airports.

Lufthansa had offered an increase of 150 euros per month for the rest of this year and another 100 euros more from the start of 2023, plus a 2% increase from mid-2023 dependent on the company’s financial results.

Verdi rejected the offer, saying it was insufficient to offset soaring inflation, which hit 8.2% in Germany in June.

The workers “urgently need more money and they need relief – for themselves and for the passengers”, Verdi deputy chief Christine Behle said in Monday’s statement.

Verdi and Lufthansa have held two rounds of wage negotiations so far. A third is scheduled for Aug. 3 and 4.

The Fed has no choice but to punish the stock market: Morning Brief