Hungarians rally against Orban’s reforms, skeptical of change By Reuters 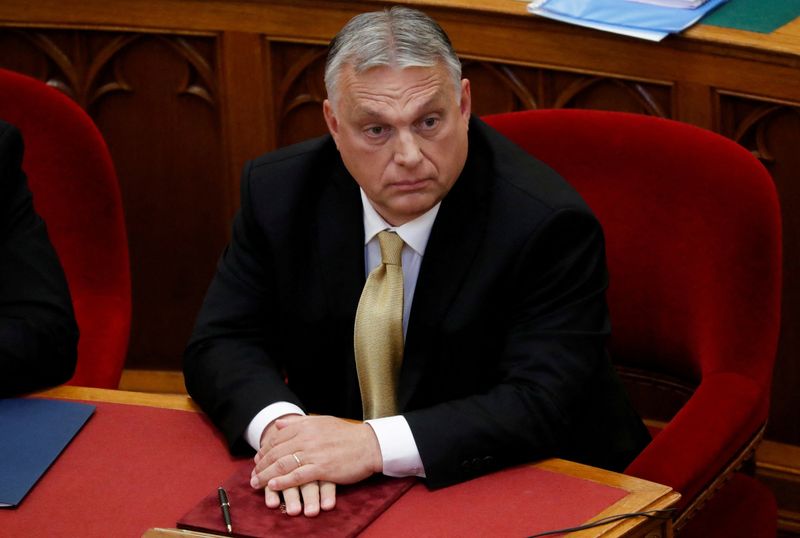 BUDAPEST (Reuters) – Around 1,000 Hungarians demonstrated against Prime Minister Viktor Orban’s government on Saturday in the latest of a series of smaller demonstrations this week since his right-wing Fidesz party passed legislation sharply raising taxes on small firms.

Nationalist Orban is facing his toughest challenge yet since taking power in a 2010 landslide, with inflation at its highest in two decades, the forint plumbing record lows and European Union funds in limbo amid a dispute over democratic standards.

The blockade of a bridge in Budapest on Tuesday failed to derail the approval of a government motion to increase the tax rate for hundreds of thousands of small firms, defying criticism from some business groups and opposition parties.

On Wednesday, Orban’s government also curtailed a cap on utility prices for higher-usage households, rolling back one of the 59-year-old premier’s signature policies in recent years due to a surge in electricity and gas prices amid the war in Ukraine.

“He is a pensioner, so the pension will be eaten up by the power bill, and they will be left grazing in the field,” he said, adding however that the small-scale protest was unlikely to force Orban to change tack.

The low number of participants at the rally indicated that despite lurking discontent with Orban’s latest reforms to shore up Hungary’s state finances, anti-government sentiment was struggling to gain traction even in Budapest, where the opposition had its strongest showing in April.

Ildiko Hende, 52, who works as a cleaner in a bank, also lamented the low turnout at the rally.

“I have been working for more than 30 years, but what is going on in this country right now is hell incarnate,” she said.

Despite Orban capping the prices of fuel and some basic foods, inflation has surged to its highest in two decades, at 11.7% year-on-year in June, forcing the central bank into its steepest rate tightening cycle since the collapse of Communist rule.

Even so, the forint is skirting record lows versus the euro, feeding into inflationary pressures.

“I just want to be able to live a normal life, not having to pinch pennies at the end of every month,” Hende said. “Prices are just so high that it makes you go crazy. This is really not sustainable.”