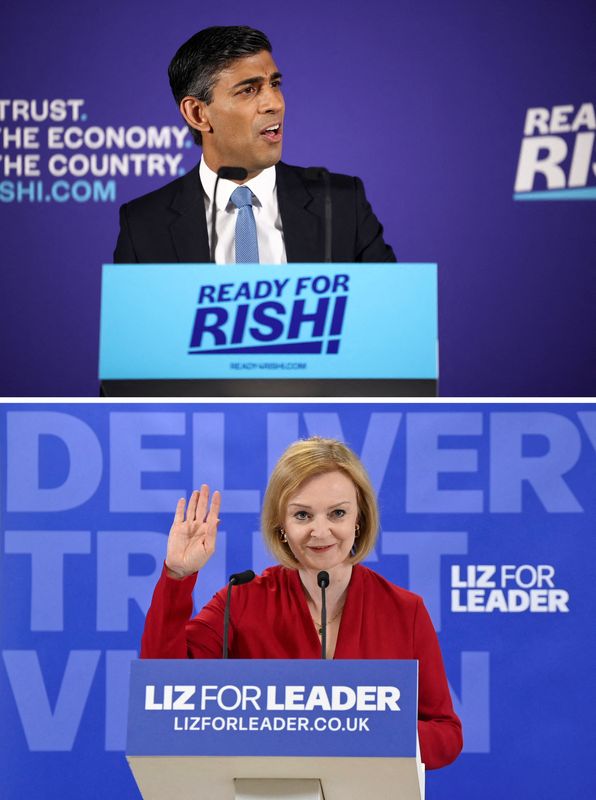 © Reuters. A combination picture shows Former Chancellor of the Exchequer Rishi Sunak speaks to the media at an event to launch his campaign to be the next Conservative leader and Prime Minister, in London, Britain, July 12, 2022, and British Foreign Secretary and C

LONDON (Reuters) – Britain’s two contenders to replace Boris Johnson as prime minister promised on Sunday to tackle illegal immigration as a priority, with both backing the government’s policy of sending migrants to Rwanda.

Former finance minister Rishi Sunak and foreign secretary Liz Truss are battling to become Britain’s next prime minister after a revolt over Johnson’s scandal-ridden administration forced the prime minister to say he would stand down.

The two candidates have so far clashed over the timing of any tax cuts at a time when Britain is facing rising inflation, stalling growth and an increasing number of strikes.

Sunak on Saturday described himself as “the underdog” after Truss topped opinion polls among the Conservative Party members who will appoint their next leader, and Britain’s prime minister, with the result due on Sept. 5.

On Sunday both candidates set out their plans to press ahead with the government’s policy of sending illegal migrants to Rwanda, though the first deportation flight was blocked last month by the European Court of Human Rights (ECHR).

Truss, who is tipped as favourite to win the leadership contest, said she would look to pursue more “third country processing partnerships like Rwanda”, would increase the border force by 20% and strengthen Britain’s Bill of Rights.

“As prime minister, I am determined to see the Rwanda policy through to full implementation as well as exploring other countries where we can work on similar partnerships,” Truss said in a statement.

“I’ll make sure we have the right levels of force and protection at our borders. I will not cower to the ECHR and its continued efforts to try and control immigration policy.”

Sunak, who won the backing of most Conservative lawmakers in earlier leadership votes, said he would treat illegal immigration as “one of five major emergency responses” he will tackle in his first 100 days as prime minister.

“I’ll take a hard-headed targets approach, with incentives for people who meet them and penalties for those who don’t,” he wrote in The Sun newspaper.

“If a country won’t cooperate on taking back illegal migrants, I won’t think twice about our relationship with them when it comes to foreign aid, trade and visas.”

Buy These 2 Stocks Before They Jump 40%, Says Goldman Sachs

The best way to Create a Handbag Collection